This is Memorial Day weekend, a time in America when we recognize the lives and contributions of friends and family now deceased.  As our country has grown in global power and influence since the turn of the last century, we have transformed this holiday into a fitting remembrance of the men and women who have served in our Armed Forces and given their lives in sacrifice for our country.  Still, it is a time to remember our ancestors and those who have preceded us in this worldly life.

In rural Kentucky, community citizens, church congregations, and cemetery board members use this occasion in the town and church burial grounds to mow the grass and weed flowers in order to welcome those visiting to honor the deceased.  Perhaps the most popular planting in country graveyards here in north central Kentucky are peonies.  First the whites bloom, then the pinks, followed by the reds and maroon blossoms.  Depending on the spring weather, temperatures, and recent rainfall, the buds fatten and then open, the flowers drop their petals, turn brown, fall to the ground, and give up their fragrance.  Their budding, blooming, and disappearance not unlike those whose headstones they adorn.

Country graveyards are located next to or behind crossroad churches, sometimes on the home grounds of large and older family farms, but more often are the area burying grounds for the Baptists, Methodists, and Disciples of Christ from nearby parts of the county.  The Point Pleasant Cemetery along Henry County Road 573 is the resting place of former residents of Franklinton, Bethlehem, Pleasureville, Drennon Springs, and Happy Ridge.  As I passed it this week, the blooming peonies reminded me of the men whose lives had an impact on mine, though for reasons other than national defense or military service.

These men were patriots of a different kind.  They were soldiers of the soil who, more than four decades ago, taught me to farm, till soil, put up hay, birth lambs, prepare plant beds, top, cut, house, and strip tobacco, pull calves, cook sorghum, and shell corn.  They were also men who, together with their wives, would visit cemeteries on Memorial Day.  Their wives, too, had deep influence upon me.  Tomato canning, chicken frying, hen setting, garden growing, rook playing.

Russell and Rose Douglas Harrod, Louis and Sarah Byers Shaw, Jesse and Virginia Woods, Clarence and Marie Johnson, Shorty Kephart, L B Mahuron, J C Shuck, John Ingles and Marietta Dowden, Jack and Rose Walker, Arkley and Hallie Dowden, Glenna Kephart, Calvin Porter Roberts, and Tommy Maddux.  All good people, all dead, whose progeny are among us in number aplenty for which I am grateful. 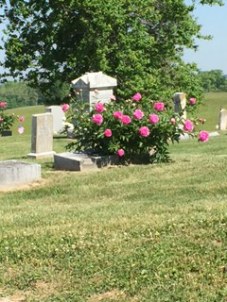 My wife, Janet, came to our farm yesterday.  After dinner we walked out the drive under the trees into Mary’s Meadow, a hayfield not yet mowed.  The fescue and orchard grass and blue grass and timothy and clover and vetch and lespedeza were nearly waist high.  As the sun set and darkness surrounded us, we became aware of the fireflies in the field.  How many there were!  As the day’s lightness faded, their lights became more obvious and undeniable.  Hundreds, then thousands, then so many more.  Each light signaling the life of those who influence us.

My hope on this holiday is that my friends and family have men and women in their lives as important to them as these were to me.  Memorial Day is really memory day.  I pray your memories are as blessed as mine.  Use this weekend to remember old friends and make current ones closer to you.